Cheers to all our chosen colonies :)
Thanks for reading. Connie on Ko-fi
[3-panel comic of a cartoon girl with a bun and a lone penguin sitting on solitary ice floes. Panel 1 shows the girl, sitting on ice, hugging her knees pensively. In panel 2, a penguin also floats along on a piece of ice. Caption reads, "When you feel like a lone penguin in the world and like nobody really understands you..." Continued on panel 3: "- but it's still a colony and you have more friends than you think." The frame zooms out in panel 3 to show the solitary penguin surrounded by other penguins on nearby ice floes. In a chorus of speech bubbles, they address the single penguin: "It's been ages!" "Have you put on blubber?" "We're gonna grab some fish -" "You should join us!" Comic illustration titled "Even Lone Penguins" by Connie Sun, cartoonconnie, 2022.] 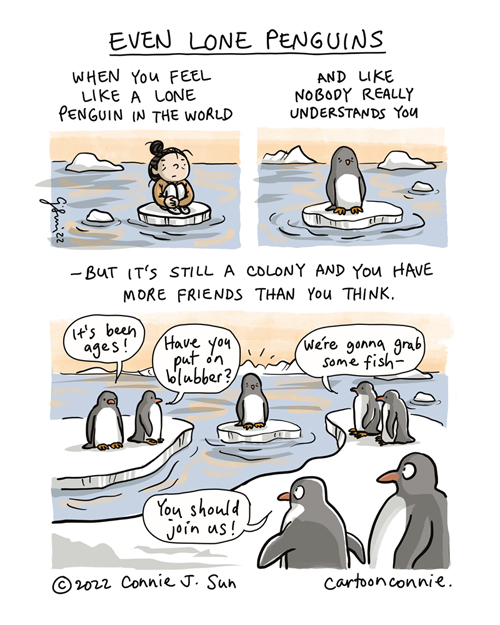 Time to jump on another ice floe. Me too!

And then there are penguins like me, who think we have friends until we need help...and discover how few there actually are.