The Force of Internet Memes

Wow, that was intense. If you were anywhere near the American internet for the last 36 hours, you probably felt it too.
If only, as a species, we could mobilize so efficiently around literally anything else.
Thanks for reading.
[3-panel comic, loosely drawn and colored, illustrating the visual analogy of an internet algorithm as a force of nature, liken to a big, unstoppable wave. In panel 1, a wide shot of a big wave approaching land. Speech text reads, "Get out of the way! Hurry, run!" A small figure is trying to escape the path of the wave, yells, "Nooooo!" Panel 2 is a close up shot of a girl with a bun, eyes bulging and frantic, with the wave looming directly above her. In panel 3, the girl has face-planted on the beach, immobilized, as the first wave temporarily retreats. A beat, then she says, "I'll just wait it out." Title of cartoon reads, "The Crushing, Inescapable Force of Useless Internet Memes." Web comic strip by Connie Sun, cartoonconnie, 2022.] 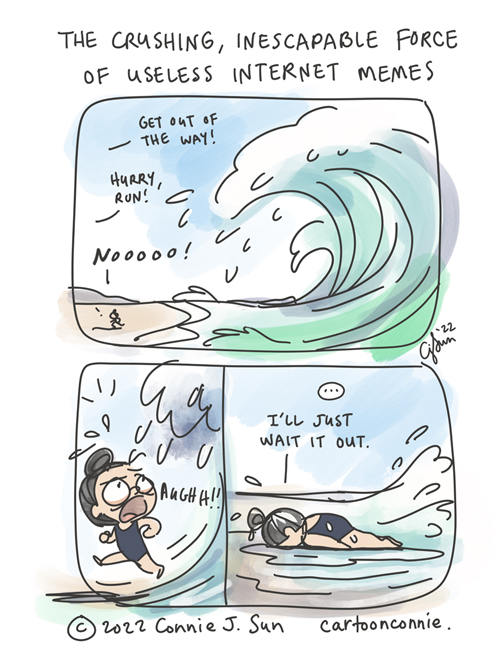 You must be referring to the slap heard 'round the world. Yes, so many things are more worthy of such attention.

I have to agree with Daniel Radcliffe, who when asked on a talk show where he had gone to talk about his own work, said he was "dramatically bored" by the over the top reaction. Here in Europe there's a rumor that it was all a publicity stunt. Oscar Wilde said there's no such thing as bad publicity, as long as they spell your name right. Of course this was before memes...