This is the quintessential Asian American experience: things don't go as planned, but you make do.

I celebrated Lunar New Year by trying to learn how to make a dish I haven't had since childhood. I modified the recipe because it traditionally contains shrimp and scallops, which I'm allergic to. It didn't exactly turn out how I wanted, but it's salvageable as its own thing -- like my AAPI identity!

Happy Year of the Tiger! Thanks for reading.

[3-panel autobio comic of a girl with a bun attempting to make a traditional dish from her childhood for the first time. Panel 1 is full of the ingredients that make up the dish, like daikon radish, rice flour, and shiitake mushroom. She's wearing an apron and is "so excited" to make the dish for the first time, which is a "childhood food memory." An arrow pointing at the girl indicates that she "studied recipes online for a week." In panel 2, it's "hours later" and she is holding a knife, looking at a flipped casserole. Caption reads, "Classic mistake: too much liquid in the batter" and that it's "too soft to slice neatly and sear." In panel 3, she's fixed herself a plate and sits down to partake: "Oh well. Still tasty." Text reads: "Turnip rice cake FAIL; mushroom lasagna WIN."] 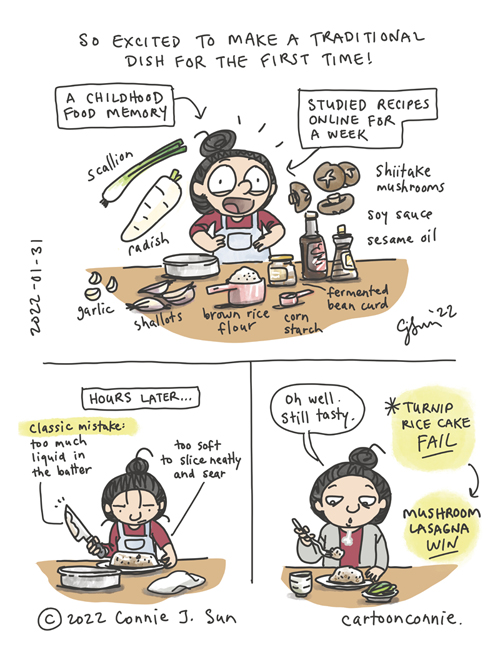 
Connie: I taught myself how to cook out of a Betty Crocker cookbook ("Chances are the man you marry will be fussy about his egges--so here are six basic ways to cook eggs"---this sentence did not survive to the next edition...)

I've learned that it takes a few times to get a particular recipe down to perfection. More times if it is a particularly demanding recipe with lots of "touches" to the food.

I use the phrases "OK" for the first few times and "To Die for" for the perfect outcomes.

I learned to cook out of an early edition of The Joy of Cooking--so early that they suggested using pen nibs to stone cherries! Most people don't even know what pen nibs are today, let alone have them around the house. My mother was a terrible cook, probably because she worked in food service--bland and institutional--so I took over at about age 13. But I still trip and fall flat sometimes. Follow the recipe carefully and it still comes out wrong!
Robert's right--I learned never to make a new recipe for the first time for company! That's always the day that everything goes wrong. But sometimes even if "it's not right" it still tastes good.

I learned to cook from both of the above cookbooks. My Betty Crocker doesn't have Robert's quote, but it does use the word "homemaker" when referring to the cook. I spent the first years of marriage attempting to cook fresh meats for dinners, but relying on canned veggies, store-bought breads, and dessert mixes.


I tried "Joy of Cooking". The cookbook kept referring me to other parts of the book to finish a single recipe. Made me as a novice cook crazy. Stopped using it and never looked back. I understand it was edited since "large eggs" in the original edition are now small by today's standards.

Same to you, Robert and Bookworm, and Connie too of course!