Reality is too real. Except I don't even have a couch!
Just for fun. Thanks for reading.
[Two-panel borderless comic, titled "Fantasy Vs. Reality," in which a girl with a braid imagines being in a relationship. Panel 1 shows a thought cloud of the girl snuggling on a couch with her arms around a hot guy. The thought bubble leads into the second panel, which shows the girl's reality, sprawled out on the couch, alone, with snacks and a creepy sheet mask on, probably watching k-dramas on her laptop. Caption reads, "I often wish I had someone I could feel comfortable around and be myself with...but the fantasy is getting more and more far-fetched with each passing day."] 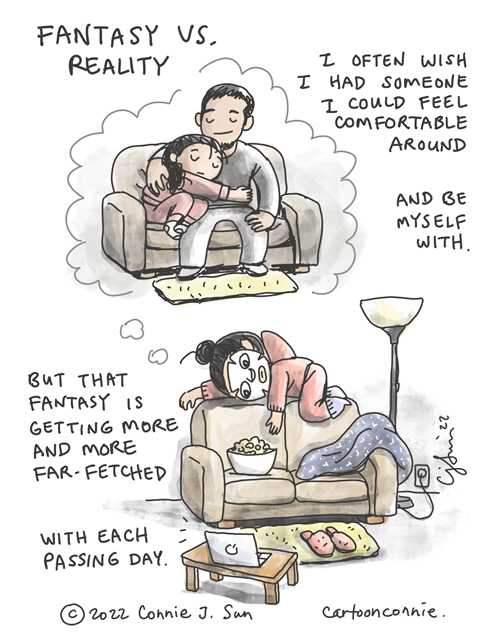 What I've finally learned is that that person is YOU! He/She doesn't exist outside of yourself. You're right in that they are fantasy. You are the one who loves you most, who you can be yourself with, who you can be most comfortable with. Hug yourself. Imagine hugging yourself as a child.