If you haven't heard of it, "Squid Game" is a new Korean survival drama that has become a mega hit on Netflix worldwide.

It looks so good that I had an elaborate nightmare just from seeing the previews.

I can usually lucid dream my way out of intense nightmares, but I couldn't escape this one! Anybody else??

Thanks for reading. Connie on Ko-fi

[4-panel comic of a girl recounting a nightmare she had after watching a preview of a survival k-drama. Panel 1 shows her sprawled on a bed. Caption reads: "I had a nightmare I couldn't wake up from this morning." Panels 2 and 3 show a character crouched tightly in fear and then running from imminent danger. Text: "It felt like being trapped in a psycho-thriller movie. Danger everywhere and every escape attempt foiled by an unseen force." Last panel cuts to present with a caption that reads: "This is why I can't watch 'Squid Game.'" Elephant appears and says sternly, "Don't...do it" while girl coos at a laptop screen, "Oooh, but it looks so good."] 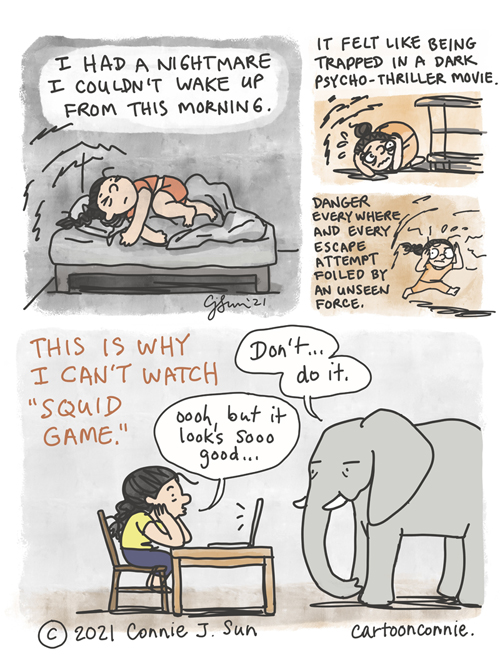