I got myself out to see friends over the weekend, which was both hard and good. Hopefully it all balances out.
These times are crazy-making, but friends are also sanity-saving. Thanks for reading.
[Image 1 is a 4-panel autobio comic of a girl with a braid, anxious to ride the subway. She is wearing a winter coat with a hood pulled over her head. In panel 1, she stands on an NYC subway platform, tense and looking over her shoulder. In panel 2, she is hunched against a support column on the crowded platform, trying to calm herself down. Text reads, "I've been scared to take the subway lately, as an Asian woman in New York City...but I also haven't seen friends in way too long, so I made myself." In panel 3, she's sitting in a subway car, masked, hands on her knees, still tense. A mustached man in the background wears surgical mask on his forehead, like a headband. In panel 4, she reaches her destination and is greeted by the smiling faces of her friends. Text reads, "These times are crazy-making, but friends are also sanity-saving." Webcomic titled "Subway Sanity," by Connie Sun, cartoonconnie, 2022.]
[Image 2 is a photo of a crayon drawing of a girl with a barrette hugging a giant cat, drawn on a dinner table topped with paper, background containing a wine glass and plates. Caption reads, "When they give you crayons with your dinner." sketch by Connie Sun, cartoonconnie, 2022.] 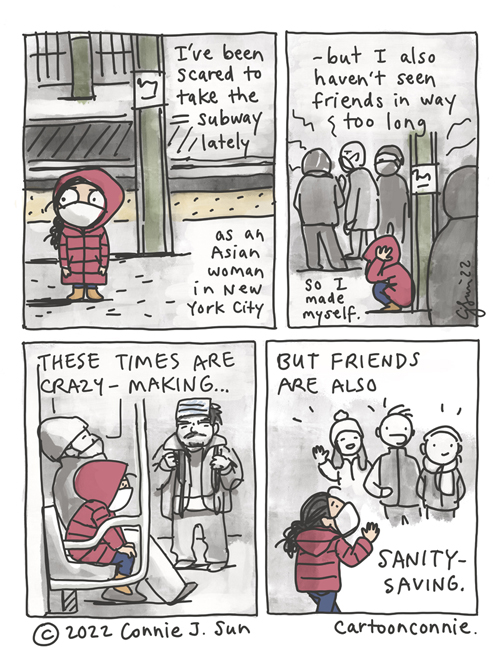 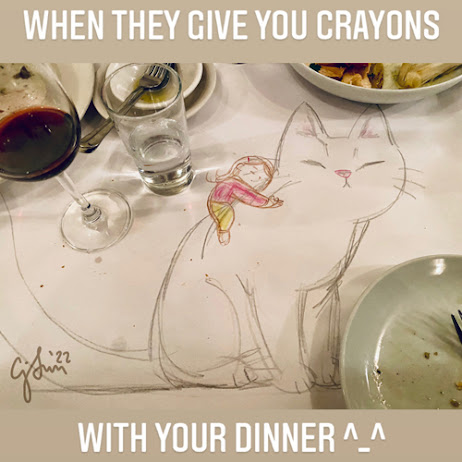 Love the drawing, and the fact you did it on the table! I remember once going to the beach with another couple, the husband was a physicist and explained Relativity to my husband complete with equations on the paper tablecloth. I always wondered if the wait staff thought we were OCD about the check!