Not generally a fan of bugs in my apartment, but this one stuck around for a few weeks and kept me company. It stuck around, sometimes outside the window and sometimes inside. Life on earth is such a random, fleeting thing.

Thanks for reading and supporting.

[4-panel, monochrome diary comic of a girl in an apartment, coexisting with a red ladybug. She is working at her desk, while the ladybug crawls along the walls and ceiling. She comments that it's been her only company for several weeks, besides a decorative fern. In the final panel, she says that the ladybug died today and that she laid it to rest in the fern pot.] 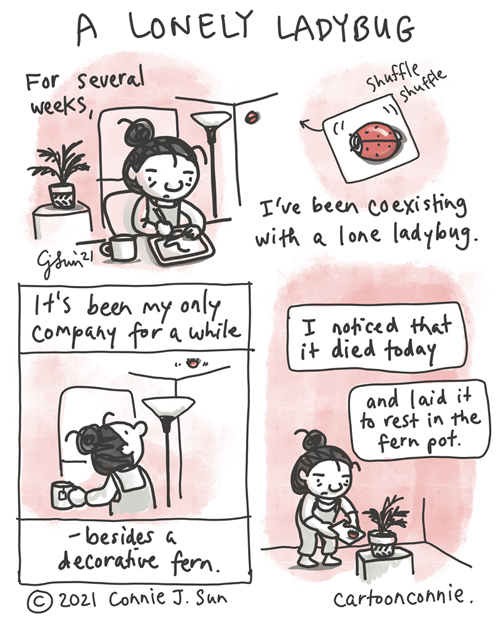 Such a clear and poignant cartoon. Thank you for making me stop and think about the little critters also struggling to survive in this weird time.

When I was in elementary school in small town midwestern USA, we kids thought that a ladybug brought good luck, particularly if it crawled on you. The more spots it had, the more powerful the luck. No idea where that idea came from but we all swore by it.