Jar Of Stuff To Deal With Later

Happy new year! Definitely don't try any of this in real life :)
Connie on Ko-fi
[3-panel comic of a cartoon girl with an elephant at the start of a new year, standing at the edge of a cliff and holding a large jar of folded paper. Panel 1: Girl, hugging jar, says, "I think I actually need two therapists...to process everything that happened last year." Panel 2: Close-up of girl, cradling the jar, with a thought bubble: "Or..." Panel 3: Girl says, "Oopsie daisy" and tosses the jar over the edge of the cliff. Heading reads: "Jar of stuff to deal with later." Comic illustration by Connie Sun, cartoonconnie, 2023.] 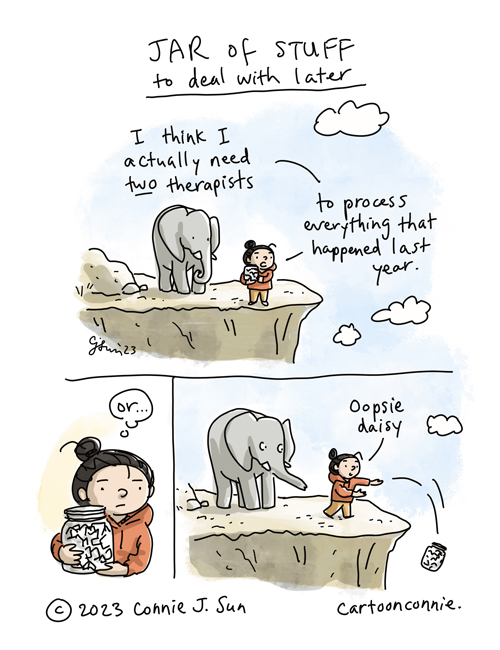 A safer way to do this (not dropping things on people below) is to write down all the bad stuff and then burn it. In a safe place like a barbecue or a fireplace--or drop it in the kitchen sink.
I've done this and it actually helps somewhat.


or a shredder, if available. I have a to-do list and am currently working on that. Wish I could get rid of it. A few painful problems and their solutions.

Best regards to you, Anna and Connie. Hope we all have a better New Year.

In the Jewish tradition, On the New Year, you cast bread crumbs on the water as if you are casting your sins away. No “oopsie daisy” required.