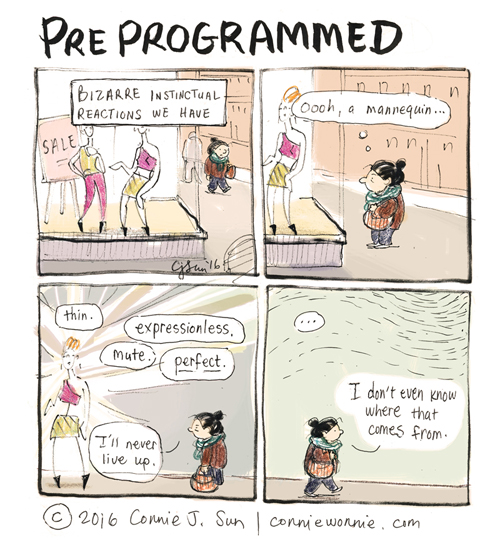 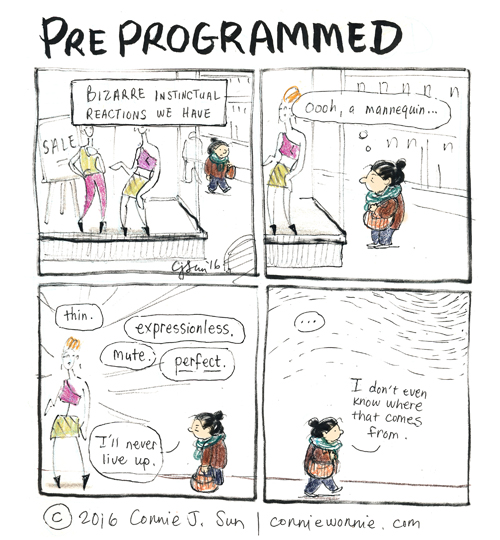 Oy gevalt! Why would anyone want to live up to that?!

From all the media messages that have bombarded you from the time you could focus your eyes. Actually, if you look back, it all started in the 60s with Twiggy and the other "waif" fashion models. Twiggy is on record as stating that she had a metabolic problem that left her that starved-looking. Audrey Hepburn, also famous for the doe-eyed superthin look, has said that she suffered from malnutrition as a girl during WW2 (along with the rest of Holland, of course).

It took me a couple of decades to realise that the doe-eyed thing was false eyelashes, not natural.

I've read that both Marylin Monroe and Elizabeth Taylor wore size 14s all their adult lives. This is hugely comforting, since they were long considered the most beautiful women in Hollywood, and are still icons.

In looking at mannequins the last few years, clothing sellers have taken to twisting and pinning garments behind the mannequin's back. Even the mannequins aren't living up to whatever the crazy we call 'fashion'.
There's a bit of comfort in that for me (and a healthy dose of worry).

Mostly I want to know why all clothes have crummy stitching and cloth now. No, I do *not* want a dress with all the seams outside, no, it's not trendy. It looks like your designers were lazy or read their own directions wrong.